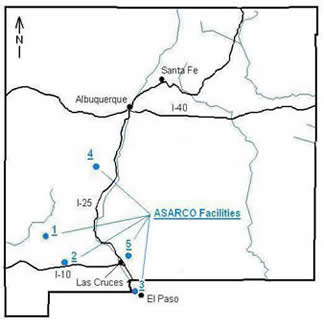 ASARCO LLC was identified as the responsible party for natural resource injuries resulting from releases of hazardous substances from five facilities. The facilities include: Blackhawk Mine, Deming Mill, Doña Ana Metals Survey site, Magdalena Mine, and Stephenson-Bennett Mine. Activities at these facilities started more than fifty years ago and are no longer operational. The release of hazardous substances injured groundwater, surface water and terrestrial natural resources.

As a result of a bankruptcy settlement with ASARCO, the Office of Natural Resources Trustee (ONRT) received approximately $1.12 million for settlement of natural resource damages, which includes $1.03 million for resource restoration and $88,250 for reimbursement of assessment costs. In addition, the State of New Mexico received $2.60 million for cleanup work associated with the ASARCO facilities.

On August 12, 2010, the ONRT issued the final Restoration Plan for the New Mexico ASARCO Facilities (RP). The RP identifies restoration projects for the Blackhawk, Stephenson-Bennett and Doña Ana Metals Survey sites. The objective of the projects is to prevent future contamination of the environment. Since there were doubts that the settlement sum would be sufficient to address needs at all three locations, the projects were prioritized and the Blackhawk Mine site was selected as the proposed project. The prioritization was made based on two factors: 1) the Blackhawk site was susceptible to erosion and weathering and had immediate need of repairs and improvements to its existing tailings impoundment, associated drainages, and barren slopes to prevent release of tailings and degradation of the site, and 2) the Stephenson-Bennett and the Doña Ana Metals Survey locations required further characterization to determine if restoration actions are warranted.

Should funds had remained after implementation of the Blackhawk site restoration, they would have been used to implement restoration at the Stephenson-Bennett and the Doña Ana Metals Survey locations based on the findings of future characterization studies. The remaining Deming and Magdalena sites were not considered for restoration as remedial actions for these sites are to be addressed with a custodial trust established for their cleanup.

The Blackhawk Mine is a former mine and mill that processed lead, zinc, copper, and silver from 1928 to 1950.  As a result of the mine and milling operations and subsequent reclamation efforts, a tailing impoundment was left behind at the site.  The impoundment was capped and re-seeded in the mid-1990s and is approximately 10 acres in size and has roughly 750,000 cubic yards of discarded materials. Over the years, portions of the cover had experienced excessive erosion resulting in the thinning of the cover and the exposure of tailings. This structural instability posed a potential threat to surface and groundwater resources from mineralized runoff and acidic drainage from on-site wastes.

ONRT’s objectives for this restoration project were to improve existing site conditions by repairing those areas of exposed tailings, enhance the thickness of the cover, and to ultimately provide for a better long-term stability of the site. ONRT contracted with the NMED in 2010 to provide assistance on the technical aspects of the project and to oversee the work of contractors.  The restoration work included the following activities:

The project required a total of 16,370 cubic yards of borrow material for additional cover, berms, and associated armoring. The restoration work was completed in early February 2016. The site was monitored though mid-2018 for potential erosional features that resulted from storm water run-off.