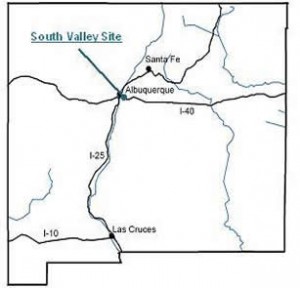 Industrial activities during the 1950s and 1960s resulted in contaminated soil and groundwater due to chlorinated solvents and other substances, leading to the closure of 20 private and two municipal water supply wells.

In 2006 and 1998 settlement agreements were reached with several responsible parties, and ONRT received total of almost $5 million for groundwater restoration.

Mountain View Nitrate Plume Restoration Project [ MAP ]
ONRT funded the partial cleanup of groundwater contamination that has existed for over 50 years in the Mountain View area of Albuquerque.  The contamination was the result of over-fertilization from a farm that operated in the area from the late 1940s to the 1970s and the resulting contaminant of concern is nitrate.  The restoration project was designed to reduce nitrate concentrations in groundwater close to or below the State groundwater standard by using active and passive remediation technologies. The active phase used a stepwise remediation process that employed a combination of pump-treat-discharge and enhanced bio-denitrification (EBD) technologies that were designed to reduce nitrate-contaminated groundwater to a concentration of approximately 40 milligrams per liter (mg/L). Upon completion of the active phase of remediation, natural attenuation would then be used to reduce the remaining nitrate contamination to the State groundwater standard (the passive phase). The site has two groundwater hot spots with nitrate concentrations exceeding 100mg/L.  Based on their locations, one hot spot is identified as the Mixing Pond Hot Spot (MPHS, the norther-most plume) and the other the Hutchens Hot Spot (HHS, the southern-most plume).  The ONRT contractor designed and implemented various field tests that resulted in the final design and construction of a EBD groundwater remediation system for the HHS (southern-most hot spot). This treatment system became operational in October 2014, it was expanded in 2016, and was eventually shutdown in March 2019.  The treatment system was successful in remediating approximately 20.2 million gallons of nitrate-contaminated groundwater, which was the equivalent to removing roughly a mass of 8,600 pounds of nitrate.  Regarding the MPHS (northern-most hot spot), the construction of a similar EBD groundwater remediation system for that area would have been financially and technically unfeasible due to the following reasons: the size of the plume and nitrate concentrations were found to be smaller and lower than initially anticipated; the aquifer was not as homogenous as expected and the impacted zone produces little water; an appropriate injection zone for the disposal of treated water could not be found; access to properties willing to accommodate the installation of an EBD system and the installation of disposal injection wells had been very difficult; and last, but not least, the budget remaining for the project was not enough to do the assessment necessary and then implement an appropriate remediation alternative that would get around the above-mentioned issues. The Mountain View project was completed in May 2019 and natural attenuation is currently the remediation option being pursued at the site. Along with ONRT, The New Mexico Environment Department (NMED) provided the technical management and oversight of the project.

ONRT provided $232,000 for the implementation of this project which included funding for NMED Environmental Health Division’s oversight of the following actions:

Upon completion of the project in 2013, a total of 25 household upgrades were done: 23 residences received new conventional on-site septic systems replacements (septic tanks and drain fields) and 2 residences were connected to nearby municipal sewer lines. In the process, 14 substandard septic tanks and 16 cesspools were properly emptied and abandoned from 24 residences; 1 residence had no disposal system at all.