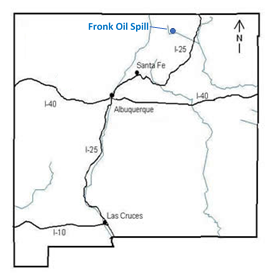 approximately 1,100 gallons of unleaded gasoline and diesel fuel into a section of the Cimarron River located in the Colin Neblett Wildlife Management Area of the Cimarron Canyon State Park within Colfax County, New Mexico. The spill killed fish and macroinvertebrates in the river and contaminated water, soils and sediments. A 1.5-mile section of the river downriver from the release was closed to public access for several months. Fronk Oil cleaned up the spill under the oversight of the New Mexico Environment Department (NMED) that involved capture of the fuel and removal of contaminated soils and sediments.

The spill Site is located at the Cimarron River in Colfax County New Mexico, approximately 5 miles east of Eagle Nest.

On June 22, 2020 the New Mexico Office of the Natural Resource Trustee (ONRT) sent a Notice of Intent to Perform Assessment (NOI) to Fronk Oil under the authority of the Oil Pollution Act of 1990.  The assessment would quantify natural resource damages (damages) for the basis of seeking compensatory relief from Fronk Oil for damages remaining after spill response and cleanup under NMED regulatory oversight. Specific resources impacted by the spill included surface water, fish populations, fish habitat, and sediment/soils along the riverbank. Fronk Oil entered into settlement negotiations shortly after NOI receipt.

ONRT filed a complaint in the United States District Court for the District of New Mexico December 22, 2020 to recover from Fronk Oil (defendant) damages for the injury to, destruction of, or loss of natural resources, including lost ecological services, resulting from releases and the threat of releases of oil into the Cimarron River near Eagle Nest, New Mexico.

On March 1, 2021, the settlement was approved by the U.S. District Court in a Consent Decree following a 30-day public notice and comment period. Under the settlement agreement, Fronk Oil has paid $150,000 to implement restoration projects that benefit fish, habitat, soil, water, and other natural resources injured, destroyed, or lost as a result of the fuel spill.

On March 24, 2021, the New Mexico Office of Natural Resources Trustee (ONRT) released the Cimarron Canyon Natural Resources Restoration Plan for the Fronk Oil Spill Final (Final RP).  The Final RP describes the ONRT’s plan to compensate the public for injuries to fish and other aquatic natural resources resulting from the fuel spill into the Cimarron River.

The Final RP is consistent with the guidance provided by the Oil Pollution Act [of 1990] Natural Resource Damage Assessment regulations at 15 CFR Part 990.  In compliance with those regulations, ONRT published the draft restoration plan for public comment on February 17, 2021, for a period of 30 days and considered all public comments when finalizing the plan. The restoration project selected for implementation by ONRT is described in the Final RP.